Birch trees are found growing throughout the Northern Hemisphere, a common sight in temperate forests and open meadows. Birch trees are considered by many to be the oldest living species of tree, remarkably hardy and fast growing. These trees have been known to grow in places where the soil has been tainted and other plants are unable to grow, and has in fact been used to cleanse contaminated soil and make it habitable to other plant life again. These cleansing properties are indicative of the plant’s beneficial nature, and birch tea derived from this plant has long been used to cleanse and promote the health of humans as well. Among its numerous benefits, birch tea is excellent for promoting skin health, combatting inflammation and supporting immune health.

Birch tea offers a natural antibacterial, antiviral and antiparasitic effect that helps the body to overcome infection quickly. It also offers a fever-reducing effect that can help to regulate a fever and keep it from reaching dangerous levels. Birch tea also contains vitamin C, an important nutrient for building up the immune system.

With its anti-inflammatory ability, birch tea works well at alleviating digestive upset. Birch tea is used to help bring relief to symptoms such as diarrhea and abdominal pains. It is known as a digestive tonic, capable of balancing and promoting healthy digestive function, and also has a laxative effect that supports regular bowel movements.

Birch tea can be highly effective at alleviating pain in the joints. Not only does it have beneficial anti-inflammatory properties that reduce swelling in the joints, but it also contains salicylate, a known natural pain reliever. This can noticeably ease discomfort in aching joints.

As a diuretic, birch tea proves to be an excellent natural remedy for kidney and bladder health. By increasing the frequency of urination, birch tea helps to flush out toxins, waste and excess fluid from the body. This is particularly useful for reducing the risk of kidney stones.

Birch tea is a natural astringent, which helps to protect skin elasticity. This can help to reduce the formation of fine lines. With its anti-inflammatory and antibacterial effects, birch tea also helps to combat skin issues such as acne and eczema.

The diuretic properties of birch tea can also be used to reduce cellulite in the body. When flushing out toxins, waste and excess fluid, birch tea also helps to expel cellulite and water weight, making it beneficial to dieting efforts.

Not only does birch tea promote kidney health, but it is also a blood purifier. It assists the body with the removal of impurities from the bloodstream. This makes it useful for helping to combat certain blood disorders.

Birch tea has shown moderate ability to promote healthy and restful sleep. As yet, it is unclear what property of birch tea causes this effect, but its mild nature makes it generally safe for use. 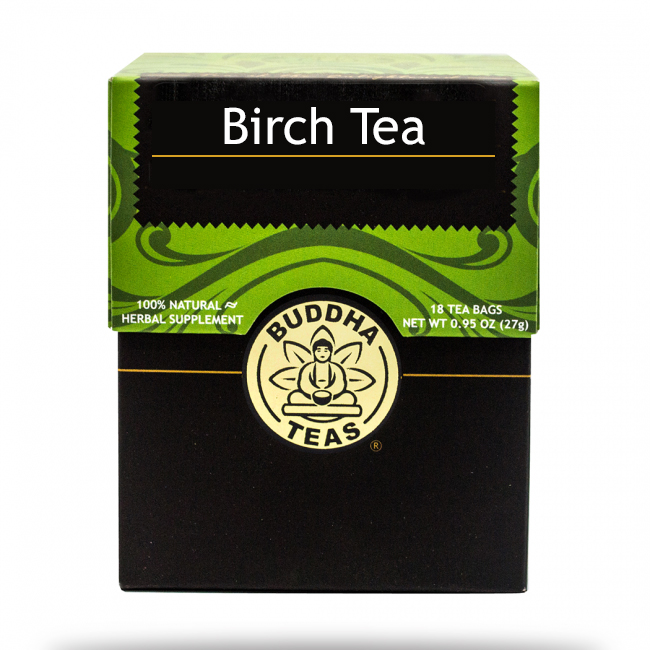 Before you go! Here is a coupon code for 20% OFF your entire order at BuddhaTeas.com